Yesterday, we made our debut at the Radiological Society of North America’s (RSNA®) 97th Scientific Assembly and Annual Meeting at McCormick Place in Chicago. This annual forum focuses on the advancement of the radiology profession. 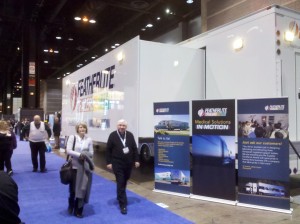 Featherlite has a large 53 ft. medical trailer on display at the event, and it’s open for tours. It’s the largest mobile radiology unit here!

Some facts about the RSNA Meeting: